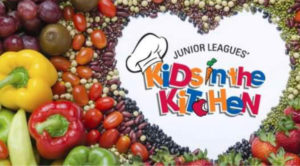 The Junior League of Odessa is excited to announce the dates for Kids in the Kitchen, a series of fun classes geared toward elementary children to educate them on making healthy food choices.

Cooking classes are open to elementary ages children (adult attendant required per child or family). A meal will be offered for all children and adult participants.

Register FREE online at: http://ow.ly/R7Q130lOpNt
or by contacting Kelly Dirden at kdirden@feedingamerica.org

About Kids in the Kitchen
Kids in the Kitchen is grounded in the belief that children and families empowered with the knowledge of how to feed and exercise their bodies will be less likely to become obese and subsequently suffer the many associated health risks.

In today’s food system, though, making healthy choices is not so simple, and healthy foods such as fresh produce are often more expensive and harder to find than the less nutritious alternatives, especially for low-income families. Thus, the issues of poverty, food access, and community development are intrinsically intertwined in the causes of and solutions for childhood obesity.

Now, Kids in the Kitchen not only puts kids (and families) “in the kitchen”, but also in the community garden, at the farmer’s market, in the dentist’s chair, on the playground, and so much more.

Through this expansion Leagues are now building programs that not only address childhood obesity but also its systemic root causes, while still maintaining the hands-on, interactive, and inclusive nature of its original iteration.

By continuing to use the site, you agree to the use of cookies. more information